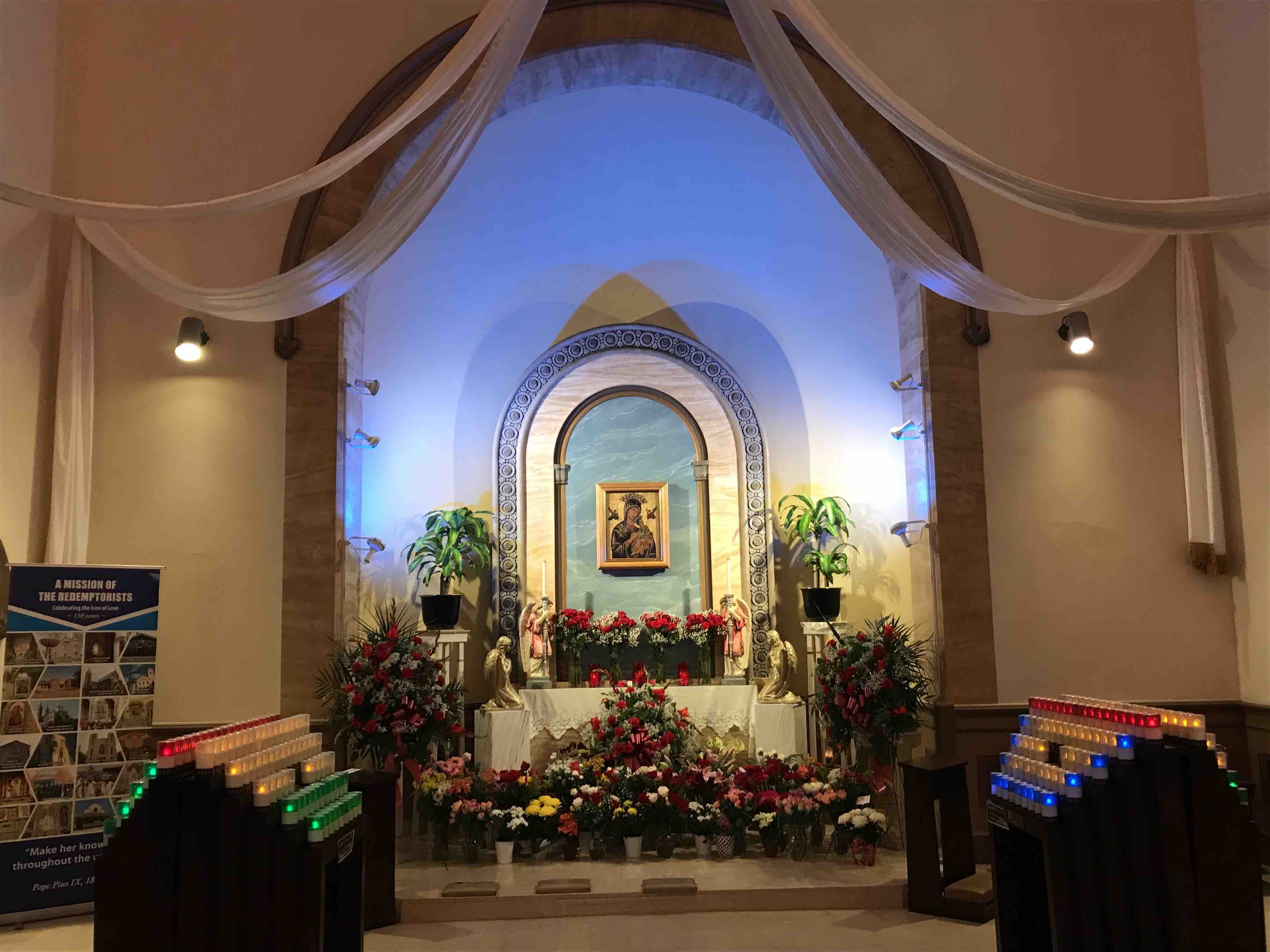 "Holy Mary of Perpetual Help" is the title which, according to an ancient document, the Blessed Virgin herself used in bringing her picture into the devotional life of Rome in the closing days of the fifteenth century. Thus, the Perpetual Help story is the story of a picture of Mary and her Divine Son, our Redeemer, and of the devotion to them which developed around it.

Jesus is seen as preoccupied even from is tenderest years with the price he would one day pay in his Passion for our salvation, and Mary is seen as his compassionate Mother.

Historically, the story of Perpetual Help is a story of people: an unknown artist who painted the picture on the island of Crete, a merchant who for some reason brought the picture to Rome in 1499, a friend of the merchant to whom he gave the picture and whose wife had visions of Mary, telling her she wanted the picture enshrined for public veneration in a little Roman church (of St. Matthew) between the two great basilicas of St. Mary Major and St. John Lateran.

The next people in the story were the men of the religious community of St. Augustine at St. Matthew's who received the picture with joy and soon found that it aroused great devotion among the faithful. There were many liturgies, impressive conversions, even miracles, so much so that the picture came to be called the miraculous image of Perpetual Help.

Then, in 1799, all came to a grinding halt. The people this time were Napoleon and his general in Rome, Francois Massena. Besides carrying off the pope into exile, they ordered the destruction of some thirty churches. Among these was St. Matthew's, The Augustinians moved to other monasteries and the miraculous picture went with them into obscurity. In time, the memory of the glorious days was all but forgotten. But not quite.

Two new people enter the story. An old Augustinian Brother named Augustino Orsetti had a favorite altar boy, named Michael Marchi, who came to serve Mass at the monastery of Our Lady in Posterula. There, the brother, who had once been at St. Matthew's, often pointed to a picture in the sacristy and told Michael that it was the famous Madonna, made homeless by the army of Napoleon. "Remember, Michael," he would say.

Michael remembered. He grew up, became a priest in the community of the Redemptorists (the next people of the story), who had just bought property in Rome (1855) and built a church in honor of their recently canonized founder, St. Alphonsus Maria de Liguori.

In tracing the history of their property, the Redemptorists soon came upon the startling discovery that they had taken the place of old St. Matthew's and their church was now the "little church between the two great basilicas?"-the very spot chosen by "Mary of Perpetual Help."

Now, if only they could find the missing Madonna. And, wonder of wonders, there was among them Father Michael Marchi, erstwhile altar-boy, who had the answer.

After a year of prayer, Father Nicholas Mauron, Rememptorist Superior General, petitioned Pope Pius IX for permission to have the miraculous picture enshrined in their church of Sant' Alfonso. The Holy Father was so pleased that he wrote the directive there and then to the Augustinians to arrange for the transfer of the picture from St. Mary's in Posterula to Sant' Alfonso.

Later, when the picture had been duly enshrined, the Pope came to pray before it. It is said that it brought tears to his eyes. He said "How beautiful she is; make her known."

Taking the pope's wish as a command, the Redemptortists began shortly thereafter to preach on the history and meaning of the picture. In an amazingly short time, devotion to Mary under her title of Perpetual Help spread into northern Europe and here in America.

As the Redemptorist congregation expanded, it eventually established missions on all five continents and wherever the missionaries went, they took the picture and its spiritual-message with them. As they preached, more and more did the story of the picture become a story of people.

They are the people of the Perpetual Help World, people of the past and people of the present, preachers and listeners, prayers and doers, clerics and lay folk. All the popes since Pius IX have had special citizenship in this world.

Pope John Paul II, was in fact baptized in the church of our Lady of Perpetual Help. Here are the great and the small, Cardinals and bishops on the one hand, Third World farmers on the other, canonized saints and would-be saints. We ourselves are somewhere in this picture, thank God. June 27 is our patronal feast. Hail Mary, Mother of Perpetual Help.